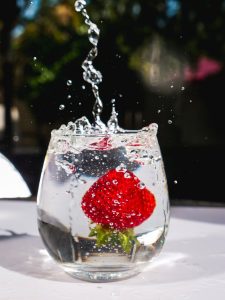 Does the thought of losing weight by simply drinking more water sound too good to be true? It is, but that’s not the whole story. If you want to lose weight, you can’t eat more high calorie food as you make the change. However, just increasing your water intake can make a difference. First, drinking water instead of high calorie soft drinks not only lowers your intake of sugar, it cuts your calorie count. Your body consists of mostly water with your brain and heart 73% water and your lungs 83%. You can see how mild dehydration might slow you down and leave you feeling sluggish.

You won’t just feel sluggish, your metabolism may actually be slower if you’re dehydrated.

What’s the first thing you grab when you’re feeling wiped out, probably coffee or a soft drink with sugar or caffeine. Next time, try a cold glass of H2O and you’ll feel a burst of energy. Drinking water not only boosts your energy, it boosts your metabolism by as much as 30% for an hour to an hour and a half. In fact, one study showed that drinking approximately 8 and a half cups of water a day increased the metabolism of the average person who drank less. It caused those people to burn an average of an extra 96 calories a day. Over a year’s time that means burning an extra 35, 040 calories, which would mean a weight loss of ten pounds.

Your body sends out messages that are sometimes incorrect.

If you’re thirsty, you may find yourself feeling hungry. However, that hunger is for something juicy, like watermelon or chips with lots of salsa. Even a shake or bowl of ice cream sounds like it could fill the bill. The problem is, you may just want to hydrate and drinking a glass of water could be all you need to stop those cravings. Next time, try a bottle or glass of water first and wait. You might find those cravings dissipating.

Fill up on zero calories before a meal.

Try something a little different for a week or so. If you’re tracking meals and food intake, this is even more interesting. Before each meal, drink two glasses of water. Start sipping a half hour to an hour before so you don’t have to guzzle it down, finishing the second glass right before your meal. One study followed two groups, one that drank two glasses of water and one that didn’t. The group that drank water lost 44% more weight. Water acts like an appetite suppressant, filling you up without adding extra calories.